Taking a Look at the New AeroTech RMS-EZ Reloads

AeroTech has recently released the first loads in the RMS-EZ line of reloads, the I161W-14A, The I357T-14A, and the I211W-14A. These reloads are the first to feature the new RMS-EZ all-in-one delay system which promises to reduce errors and simplify the building of these reloads.

Sirius Rocketry has received stock of these reloads and has them in our hands, so let's take a look! 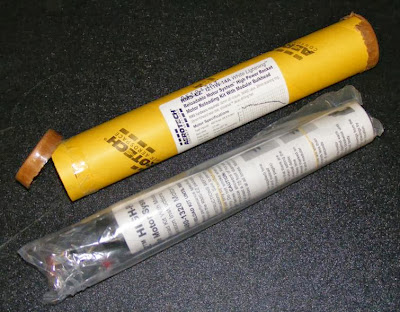 The RMS-EZ reloads are packaged in same type of packaging as the newer AeroTech DMS (Disposable Motor System) single-use motors. Like the DMS motors, the RMS-EZ reloads have a label with motor information and a thrust curve on the outside of the tube. Inside, a bag holds all the reload parts. 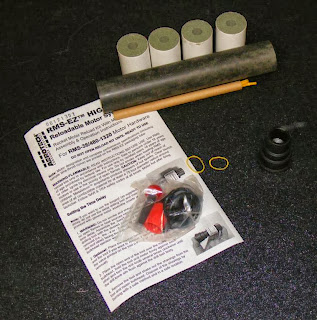 Our example for today is the I211W-14A reload, a four-grain White Lightning motor for the 38/480 case, or larger cases with the use of the Reload Adapter System (RAS). One particular part of the Reload Adapter System is very handy to have, for reasons we will see in a little while. When we open the bag, we get the typical reload parts, instructions, and a smaller bag of parts. 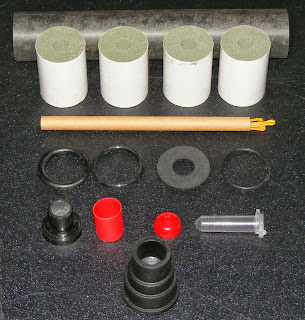 Most of these parts are the same as will be found in a typical RMS-Plus reload kit. You have (from top-to-bottom, left to right): liner tube, propellant grains, FirstFire igniter, aft o-ring, forward o-ring, aft insulator, forward seal disk o-ring (in motors that require it) or a forward insulator, nozzle, nozzle cap, ejection charge plug, ejection charge powder and the new RMS-EZ modular bulkhead. 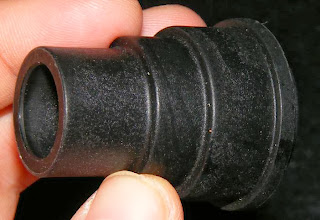 This is the new RMS-EZ modular bulkhead, taking the place of most of the standard forward closure assembly. It incorporates a 14-second delay, adjustable with the use of the Universal Delay Adjustment Tool (UDDT). 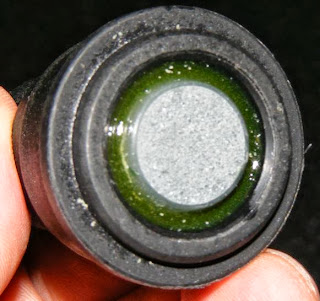 A view of the rear of the bulkhead shows the 14-second delay train already potted in place, eliminating many of the delay parts from the assembly of the forward closure in standard RMS-Plus reloads. 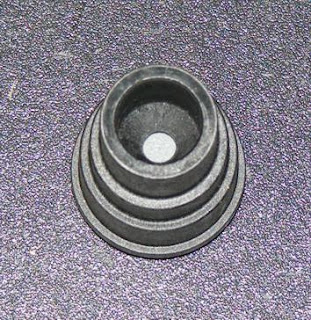 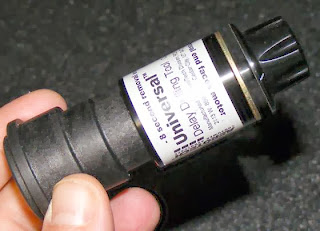 The Universal Delay Drilling Tool is used to drill the delay down to the required length in two or four second increments.  The tool, like the two other tools for the RMS motors that are available use a 1/16" washer to space for certain 2-second increments.  A 1/32" washer could be substituted if necessary for even finer control in 1-second increments. 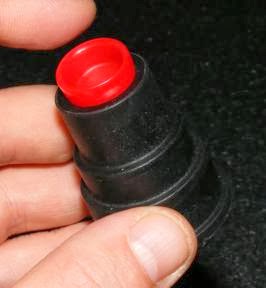 Similar to LMS motors and many reloads, the reload includes a plug to retain the ejection charge.  After drilling your delay to the required length, you add your ejection charge powder, and retain it by pushing the internally-installed red vinyl cap down into the ejection well. Gone are the days of paper discs retaining ejection charges, large hard red caps, or amazing tricks with masking tape! 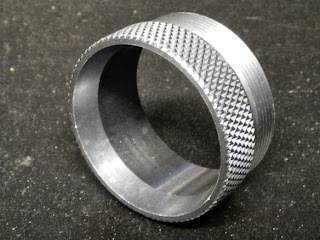 The RMS-EZ uses all the standard RMS casings, and the standard rear closures, but since most of the standard function of the forward closure is now duplicated by the new RMS-EZ modular bulkhead, you can put your standard RMS forward closures aside. You will need the Forward Closure Retaining Ring out of your Reload Adapter System (RAS). The RMS-EZ molded modular bulkhead is very much like the Floating Forward Closure in the RAS, and can be used in the same way with longer casings and the RAS grain spacers.

If you do not already have a RAS Forward Closure Retaining Ring, these are also available separately. 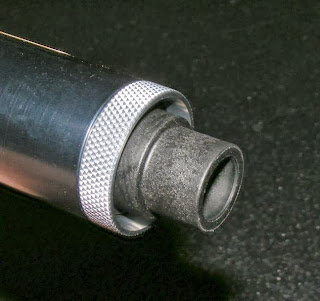 The forward end of a RMS Casing showing how the Forward Closure Retaining Ring is used to retain the RMS-EZ modular bulkhead.


The first reloads to be offered in the line include the I161W-14A, I357T-14A (fits RMS-38/360 hardware) and I211W-14A (fits RMS-38/480 hardware). The traditional RMS-Plus style of reloads remain available for these motors while stock lasts, as AeroTech transitions from the old style to the new style EZ motors on these items.

AeroTech also says that additional RMS-EZ reload kits are under development including those in 29mm and 54mm diameter.

A huge selection of in-stock AeroTech Hobby Line and High-Power rocket kits, motors and supplies are available along with thousands of other great rocketry products from the world's finest hobby rocketry manufacturers at the Sirius Rocketry Online Store.
Posted by Sirius Rocketry at 10:19 AM

Email ThisBlogThis!Share to TwitterShare to FacebookShare to Pinterest
Labels: AeroTech, High-Power Rocketry, I161, I211, I357, Reload Adapter System, RMS-EZ, Taking a Look